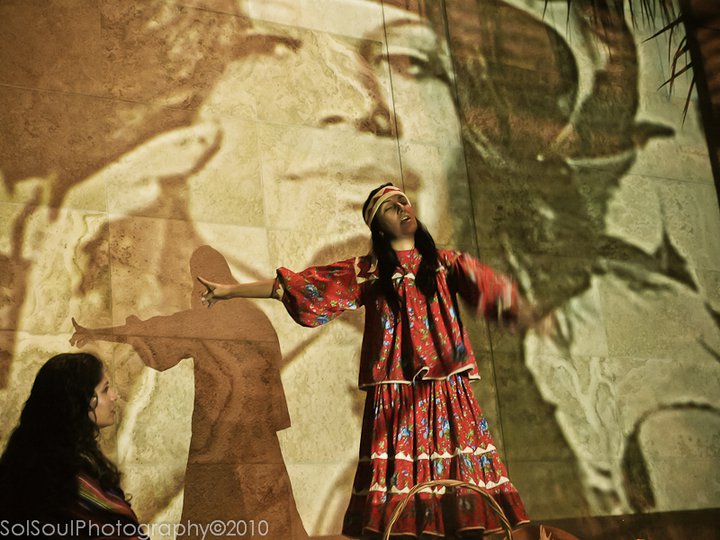 An intervention ceremony-ritual was shared on October 12, 2010 to honor ancestors and spirit.  It was also done in order to create a meaningful work that highlighted the complex understanding of the commemoration of Indigenous People’s Day also commemorated in many locations as Christopher Columbus Day or Dia de la Raza.   The main focus of this prayer intervention was to have a welcoming and blessing to the Olmec stones and statues which were on exhibit at LACMA.  Many of us involved in the ceremony considered these Olmec statutes as our ancestors and a part of our history.  The prayer intervention was done on Indigenous People’s Day (10/12/10) and consisted of an unannounced and unauthorized use of certain locations at LACMA for prayer including indigenous drumming, song, and dance.  The first part of the ceremony intervention was done just outside the new exhibit building.  Following the prayer which including native prayer drumming and singing by men and women, and aztec dance, a group shared huge projections of videos and images based on Indigenous philosophy and resistance as well as live poetry, hip hop and more on the outside walls of LACMA’s Broad building along Wilshire Boulevard. 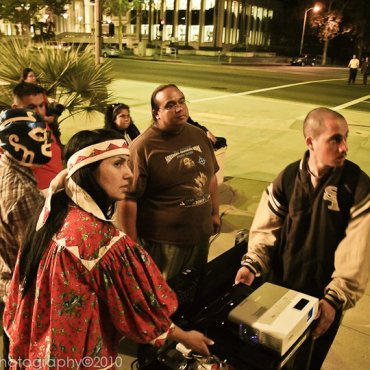 The intervention, which lasted roughly three hours, was collectively organized by various individual activist artists and initiated by Miguel Paredes and myself, Felicia ‘Fe’ Montes who came together for that night.  It was important to do this ceremony at LACMA because of the Olmec exhibit, but also because it referenced Chican@ art history in that it spoke to Asco’s 1972 intervention “Spray Paint LACMA” where the chican@ performance artist spray painted LACMA’s walls with their names as a statement to show how there was a lack of Chican@ artists exhibiting at LACMA.  This 2010 version threw our own creations on the wall as virtual placazos in a hi-AzTECH style and asked the same question as to where are the Chican@ artists– this time pushing the question to where were the women, queer, indigenous and spiritually identified Chican@ artists?  Another question, was is this the only manner another large exhibit relating to Raze could happen—with work done from deceased artists from thousands of years ago?  These were some of the questions and thoughts that guided the artwork.  In creating these prayer interventions at key locations and on key days across Los Angeles we purposefully put engaged meaning to locations that had other meanings, performed protest and created collective prayer.

“It was to honor and welcome these ancient Mexican ancestors to the second largest community of Mexicans outside Mexico City.  It was to say that we are here, not just in stone, not just ancient history, but alive and making his & herstory.  It was both a welcoming/honoring ceremony and a protest.”  -Fe